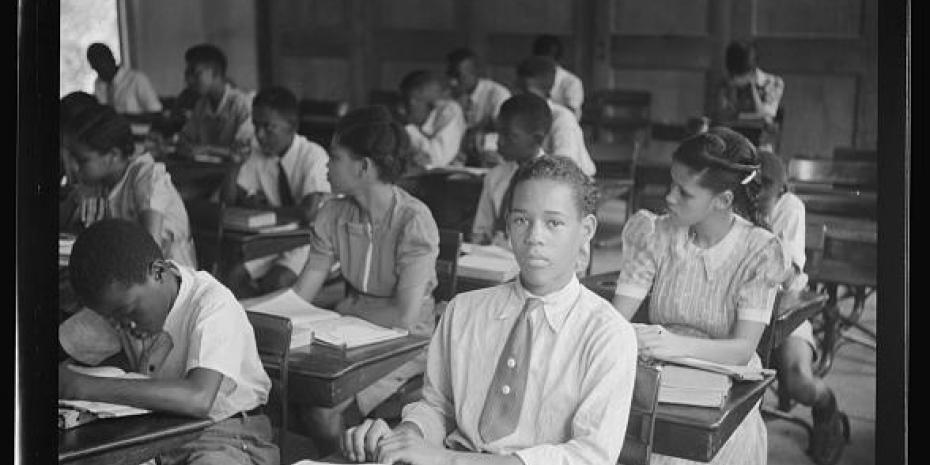 And those are just cases which involved video evidence. Earlier this year in Kenner, LA, a 10-year-old black girl with autism was ripped from a tree by five officers, after she had an outburst in class. By the time her grandmother arrived at the school, the officers had the child on the ground with a knee in her back, allegedly restricting her breathing. “Why do they [the police officers] hate me?” she asked her grandmother later.

Unfortunately, stories like these continue to be common, the effects of which go well past those directly involved. Former classroom teacher and Lowndes County, Alabama, based community organizer, Catherine Coleman-Flowers, provides analysis to the effects of the normalization of these acts to society at large.

“To constantly be bombarded with this type of violence on the part of officials representing the state is akin to trauma, and in the case of black people and brown people, racial trauma. It is unjust, immoral, and unlawful,” she explains.

Adding, “The attack and subsequent arrest of this [Spring Valley High] student was no more justified and lawful than the assault of the marchers on the Edmund Pettus Bridge. Extreme methods of punishment including the criminalization of childlike behavior in a school are a sure sign of a sick nation.”

Not everyone sees it this way, however, even with video evidence public perception of child arrests is divided. In the case of Spring Valley High, some have defended Deputy Fields’ actions. Many of them have said that the student should have “done what she was told” in the first place. Most have explained that they must “wait for more information,” that watching a few minutes worth of video does not tell us the whole story. I agree. We know very little about this girl.

While most everyone has seen the video of the altercation by now, a lesser known interview of fellow classmate, Niya Kenny, began to shed some light. In a discussion with local South Carolina station WTLX, Kenny, who was also arrested for expressing her contempt for the officer’s actions, can be heard saying, “I know this girl don’t got nobody, and I couldn’t believe this was happening.”

I doubt that it is hard to imagine, but this is not the first time a child has acted out at school. In fact the video brought to my mind a memory of a situation I observed in my own school experiences.

My friend Jamie always came to school in a long sleeve, flannel shirt. This was sixth grade in the 80s, and most other boys were wearing novelty t-shirts with puffy chevron jackets, or velour tops with corduroy pants. He stood out in this way, but in most other ways he was nearly invisible.

He always sat at the back of the class. He was not a good student, but never seemed to care about it anyway. He was quiet and preferred to be by himself, so mostly everyone – including the faculty – left him alone.

He rode my bus, so I knew him, but he sat in the front by himself. I have to admit I never really paid him much mind to him either, until one day on the playground when I saw a few boys chunking rocks at a stray dog that had wandered up to the school yard. I remember watching as Jamie not only defended the dog, but also gave the scruffy looking puppy a bit of some sort of food that he had in his pocket.

That afternoon, I sat next to Jamie on the bus, and we talked (well, mostly I talked), and we began our brief friendship.

I don’t remember what started the fuss the day that our relationship ended. I just remember Jamie, in his flannel shirt, holding onto his desk with white knuckles as our teacher stood over him. She was demanding that he rise from his seat and go to the principal’s office, but Jamie had the opposite idea. He was flat out refusing to move.

Visibly frustrated, our teacher turned to us and commanded that we keep doing our work, but of course we didn’t for a second take our eyes off of the act of insubordination happening at the moment. It didn’t matter, because as soon as the words crossed her lips she turned and rushed out of the classroom.

She came back with our principal, Mr Brandon. He was a big man with broad shoulders. He too was a quiet guy, but when he did speak, his deep voice could strike fear in the most misbehaving of students.

Mr Brandon took our teacher’s place towering over Jamie in a menacing way. Jamie did not appear phased, even as he sat in the shadow of this large man. In no uncertain terms, Mr. Brandon repeated the demand that Jamie get up and follow him to the office. Honestly, I thought he was going to jerk him out of the desk and haul him down the hallway in similar fashion to what recently happened in South Carolina.

But then, just as it seemed that all hell was about to break loose, we saw Mr. Brandon’s demeanor soften. Slowly he got down on one knee, gently touching the boy’s shoulder. In a quiet, soothing voice, one that we had to strain to hear, he looked Jaimie in the eye and said, “Come on, son. Let’s talk.”

Jamie looked at him sideways, jerked away from his touch, but he eventually he got up and stomped into the hall and down to the office.

We never saw Jamie again. Our teacher came and gathered his things, and although there were plenty of whispers between the teachers in the hallway, but no adult ever really told us what had happened.

In fact, we probably would never have known the fate of our classmate, except another kid in our class had been living next door to him. He told us how the police had arrested Jamie’s father and how he had been charged with child abuse. It seems that Jamie’s dad had a nightly habit of getting drunk and beating his son. For Jamie, that childhood trauma was over, he was off to stay with relatives and I sincerely hope to a better life than the one he had been living.

Jamie was lucky. He was lucky because someone took the time to look behind his behavior and to work in his best interest. Jamie, a white boy, was given the privilege of understanding, a privilege often denied to children of color.

According to the U.S. Department of Education Office of Civil Rights, that might have made a huge difference as to how Jamie’s act of insolence was handled, as opposed to the children in the incidences listed above.

The statistics around the disproportionate rates of school suspensions and expulsions for students of color are undoubtable. Yet, to some members of the public the benefit of doubt should be immediately extended to the officers in these situations, as opposed to the children.

If technology had been available as it is today, and Jamie’s actions had been recorded, any person who watched the video might believe Jamie to be nothing more than a hooligan. They would not have had the opportunity to see those other times in Jamie’s life, times when he showed his internal good, such as when he cared for the stray dog.

To pass judgment on this child at Spring Valley High, based on these few minutes is not only unfair, it is damagingly inconsistent with the recognition that her life is made up of more than this one moment in time.

The thing is we do not know the full story behind the girl in the video or her actions. It might be, as many have suggested, that she was being “a brat.” We don’t know the whole story, but then neither did Deputy Fields. He didn’t take the time to know because to him, in this moment, this wasn’t a child, this was a criminal.

Mr Brandon, who literally saved Jamie, was an educator. On the other hand, Deputy Fields is a police officer, trained to stop crimes. He is trained to see people as perpetrators – even children, and like many others, he was invited into our school system to react to children’s behavior. It is easy to take a child out of his or her humanity, to deny them the dignity they so richly need and deserve, when criminality is your only focus of interaction.

Further, as these children are left again and again to internalize the violence from overzealous adults, how is their criminalization used to solidify the false narratives of the collective American subconscious?

“This characterization has been used to execute young black men, shut off water to poor families, poison our environment, and now to assault a high student who is a child. This is a symptom of a greater ill in this country. Now we are stooping to the criminalization of behaviors of a teenager, as well as defending the violent attack with no shame,” says Coleman-Flowers.

Who is to say what any child could become with proper protection, careful cultivation, and loving care by “the village”? With the state that this country and our world is in, can we afford to throw a single child away?

The idea that some children are undeserving of the level of compassion that Jamie received is a symptom of the continuing racist and classist perversions of American society. By writing these children off as “bad,” and “deserving” of overly harsh treatment, we are risking the losing of contributors to the success of our intertwined humanity. This blind, unknowing, pessimism puts us at risk of denying the greatness of individuals to whom we may have all one day benefitted from. We risk losing them, even before we know their full potential.

And it is not like we do not have innumerable examples of children who have made mistakes or lived traumatic and adverse childhoods, yet have become amazing contributors to our world. To those ranks, we can look at the positive effects of people like Oprah Winfrey, Bill Gates, Vincent Van Gogh, Allen Iverson, and Jackie Robinson, to name a few.

Racism and blind pessimism only leads us to the unjust notion that you can take a small sliver, a moment, of a person’s life and pass judgment upon their entire being. By doing so we are not only denying a child the human right to safety, but also ourselves and our society the opportunity to benefit from the gifts that they have the potential to give.