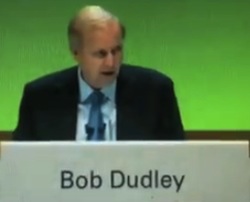 Last week, three delegates from the Gulf Coast attended BP’s Annual General Meeting (AGM) in London and spoke about ongoing impacts of company's 2010 Oil Disaster in the Gulf of Mexico. The BP board responded by painting a rosy picture of the Gulf Coast ("It's an ecosystem that's used to oil," said BP chief Bob Dudley) and defending the company's use of toxic dispersant (Dudley again: "...Corexit is about the same as dish soap"). The third anniversary of the Deepwater Horizon explosion, which set off the worst oil disaster in U.S. history, is this Saturday, April 20th.

Cherri Foytlin, a South Louisiana mother of six and wife of an oil worker, told the BP board she is deeply concerned over BP’s inability to operate safely:

“I was looking at the report you put out for the shareholders now, in 2013, and I was looking at how you're approaching process safety issues and then I put that right next to the 2005 shareholder report after the Texas City accident...and I realized it was pretty much the same rhetoric.”  (Watch Cherri Foytlin's full comments)

Drew Landry, a South Louisiana musician and filmmaker who has documented the health effects of BP's oil disaster on coastal residents, voiced concerns to BP shareholders regarding human health effects from the disaster:

Bryan Parras, of Texas Environmental Justice Advocacy Services (t.e.j.a.s.) in Houston, Texas, challenged BP board member Ian Davis for failing to follow through on the pledge he made last year to visit communities on the Gulf Coast who are still struggling from the disaster:

"Why didn't you visit us after you agreed to come and experience a critical look at the Deepwater Horizon Disaster? What exactly is it that Mr. Davis and his fellow top executives and BP board members are so afraid to witness? I think that a 'robust' approach to dealing with this would involve meeting with the communities that actually live there, and not just a slick PR campaign."  (Watch Bryan Parras's full comments.)

In response to the questioning, BP's Group Chief Executive Bob Dudley defended the company’s action in the Gulf, saying that because there are many "natural seeps" in the Gulf of Mexico, "it's an ecosystem that's used to oil. So oil on water is not something new."

Dudley also defended the use of dispersants during the ensuing spill response saying, “The toxicity of Corexit is about the same as dish soap, which is effectively what it is and how it works... In hindsight no one believes that that was the wrong thing and it would have been much worse without the use of it.”

When Foytlin, interjected, “We do,” Dudley appeared flustered and went on to say, “I have not seen a single study, of people who have studied it scientifically, deeply, that would look back and say dispersants should not have been used.  I do not believe anybody - anybody with almost common sense -  would say waves of black oil washing into the marshes and beaches would have been a better thing, under any circumstances...." (Watch Mr. Dudley's comments "on Louisiana")

Yet a number of experts, community members and observers of BP's Gulf Coast cleanup effort dispute the claim that Corexit is harmless. One of them, Dr. Wilma Subra, a MacArthur genius award-winning chemist known for good science and common sense, says:

“Communities along the northern coast of the Gulf of Mexico (states of Louisiana, Mississippi, Alabama and the panhandle of Florida) have experienced severe human health impacts as a result of being exposed to the BP crude oil and dispersant associated with the BP Deepwater Horizon disaster.  Exposure and associated health impacts continue today, three years after the disaster, as a result of ongoing exposure to crude oil in the environment; as BP crude oil remains prevalent in the environment; and as BP crude oil continues to be washed on shore in the northern Gulf of Mexico, on an ongoing basis.”

Dr. Riki Ott, a Cordova, Alaska marine toxicologist and author who lived through the 1989 Exxon Valdez disaster, has been alarmed to see the same cleanup methods and human health ailments repeated in the Gulf of Mexico. She wonders why mistakes of the past continue to be repeated with each new oil disaster. "What we have known since the 1970s is that chemically dispersed oil is much more toxic than oil alone. And with the combination of oil plus dispersant, the dispersant is acting as an oil-delivery mechanism... We knew this back in the 1970s and it's just being confirmed again and again and again."

Both Subra and Ott were among the experts and community members featured in a series of recent press calls hosted by Bridge the Gulf and the Gulf Coast Fund following BP's Annual General Meeting in London on Thursday. Against the backdrop of BP's well-funded PR campaign and comments to shareholders, the recorded conference calls were conducted to
inform media and the outside world of current conditions in many Gulf coast communities and homes. Medical experts, lawyers, scientists, fishermen, and indigenous community leaders spoke of ongoing impacts on people, ecosystems, economies, and ways of life along the Gulf Coast. Many decried the use of dispersants.